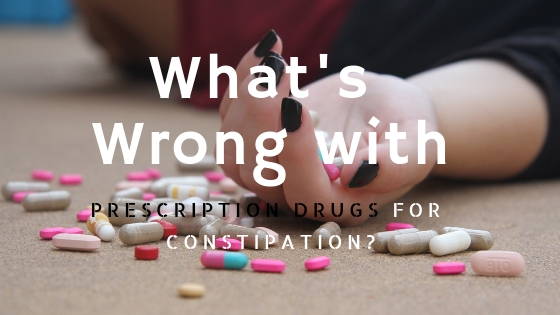 Well, maybe nothing. However, you should consider the potential biases of medical professionals when inquiring about the use of prescription medication to treat constipation. There's nothing wrong with questioning doctors and asking for evidence to prove something works without harmful side effects. Along those lines, it's equally important to ask for evidence that suggests something doesn't work.

The logic is the same as when people seek second opinions. If all doctors were equally knowledgeable on specific topics, there would be no need to seek second opinions. However, that's not the case and everyone reading this has likely been in a situation where one doctor contradicted another doctor - I certainly have. Both are M.D.s, so why would one completely disagree with the other?

According to research conducted by Dr. Meredith Portalatin and Dr. Nathaniel Winstead, 20% of the population suffers from chronic constipation and $821 Million is spent on OTC drugs and office visits alone! That doesn't include the prescription meds. Something to think about.

Dr J. Pellow of the University of Johannesburg states, "Conventional laxatives only offer a temporary solution and may cause dependency. Side-effects of conventional laxatives include nausea, vomiting, flatulence, diarrhoea, abdominal pain, electrolyte imbalance and skin eruptions."[3]

Top 10 Drugs for Constipation and What You Should Know About Them:

"A very important rule of thumb is that all irritant laxatives are habit forming. By in large, if it comes in a small package, such as a pill or two, it is an irritant and, therefore, habit forming."[9] - Dr. John A. Frantz

In summary, when taking most drugs available on the market to treat constipation, the evidence shows that there is a high probability of experiencing headache, nausea, vomiting, and abdominal pain. The likelihood and severity of the side-effects tends to increase over time and with higher doses.

Most often, there is plenty of evidence that a drug that is prescribed by a doctor will work to treat the symptom. However, clinical trials and scientific studies crafted to prove the effectiveness of a drug do not consequently prove that alternative treatment options don't work. Furthermore, these studies are typically inconclusive when it comes to long term health problems associated with the prescription drugs. Once the pharmaceutical company gets the drug through FDA approval , what incentive is there for anyone to go back 20 years later and assess the correlation of disease and illness to that specific drug?

Listen, it's up to you to decide what goes into your body. Sometimes doctors will say something doesn't work or is dangerous without sufficient evidence to prove their claim. They might cite a study or case where 1 person out of 500 developed a problem from conducting an enema at home and try to pass that as statistical justification for not using enemas.

Ultimately, YOU have to decide if you want to trade the discomfort and problems caused by constipation for the side-effects and problems caused by the drugs you are going to take. For me, I think feeling nauseated is horrible, so I would rather use an enema than take drugs. If I want to be nauseous, I'll grab a bottle of scotch or go on a cruise.

Then, there's the factor of dependency. If you suffer from chronic constipation and decide to make these drugs part of your lifestyle, how do you know you won't develop a dependency? Doctors already suggest that is a possibility - I quoted two earlier in this article [3][9].

With clinical trials covering a relatively short period of time, It's going to be pretty difficult to understand the long-term impacts of these drugs.

Remember, tests and clinical trials are expensive and the reason they are typically conducted is to get a new product on the market to generate revenue. Why would anyone throw money at a trial over an extremely long period of time, knowing they won't see any return on their investment?